Understanding the nature of cancer, one cell at a time

A team of researchers at the U of I, led by Beckman full-time faculty member Gabriel Popescu, have harnessed the power of quantitative imaging to examine the effects of drugs on single breast cancer cells, providing a more advanced understanding of how cancer reacts to medical interventions.

Cancer affects millions of people every year in various ways. While some people have great success in fighting a particular kind of cancer, others with the same cancer type may have a totally different experience. Researchers are trying to find personalized treatments for each individual patient by figuring out how cancer cells respond to drugs at the individual cell level.

Examining individual cancer cells and each cell’s response to drug therapies is now possible, thanks to a quantitative phase imaging modality that can precisely measure cell growth, life cycles, and responses to drugs on a cell-by-cell basis—a feat that has previously been impossible. This capability will allow researchers to more fully understand the disease and how medical interventions affect cancer cells.

“We believe that there should be a better understanding of how cancer grows and responds to drugs. Right now, the way to test the effectiveness of drugs on cancer cells is to perform a bulk measurement, to get one reading on many different cells,” said Gabriel Popescu, electrical and computer engineering and bioengineering professor, and full-time faculty member at the Beckman Institute in the Bioimaging Science and Technology Group.

The process uses spatial light interference microscopy (SLIM) developed at the Beckman Institute by Popescu and his lab. The researchers used the SLIM instrument to precisely measure the growth of breast cancer cells and the effects of drugs that promote or inhibit the growth of these cells.

It has become increasingly critical to measure the effects of drugs at the single cell level rather than in bulk tissue. We hope that in the future, such single cell approaches will allow for the development of more precise and effective therapies. - Mustafa Mir

“This is a wonderful new approach with high sensitivity for understanding cancer biology and the heterogeneity and plasticity of cancer cells, key aspects that impact the effectiveness of cancer treatments,” said Benita Katzenellenbogen, Beckman affiliate, Swanlund Research Professor in molecular and integrative physiology at the University of Illinois, and co-author on the study.

This advanced research could lead to better therapies that are applied after the initial treatment for cancer, typically through chemotherapy, radiation, or tumor removal. These therapies are specially designed around the specific cancer cells to suppress secondary tumor formation. Researchers will be able to test what therapies work best on the individual cancer cells of each patient.

“As our understanding of cancer has improved significantly over the past decades, we have learned that tumors are not composed of a single cell type but are instead quite heterogeneous,” said Mustafa Mir, a graduate student in Popescu’s lab at the time of the study and now a postdoctoral research at University of California, Berkeley, and lead author on the paper.

“Given this fact, it has become increasingly critical to measure the effects of drugs at the single cell level rather than in bulk tissue. We hope that in the future, such single cell approaches will allow for the development of more precise and effective therapies.”

Popescu and his team published their results in the journal PLOS ONE.

What they found was quite interesting, and impossible to measure with existing methods that only look at bulk measurements of cells. 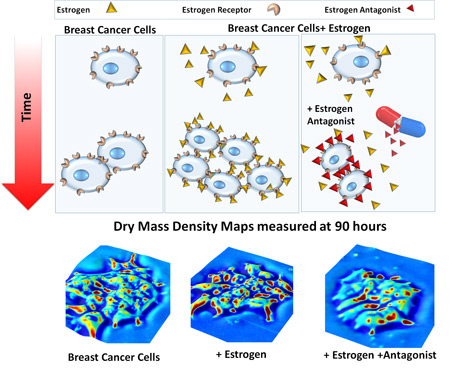 “It is well known that in the case of breast cancers that are sensitive to estrogen, an increase in estrogen results in a larger tumor mass,” said Mir. “What we found in our studies is that this increase in mass is not due to just the same cells getting larger but due to the cells dividing faster along with growing faster. This results in a large number of small, quickly dividing cells.”

“We also found that when an estrogen receptor blocking agent is used as a drug, it’s slowing the cell cycle, preventing these cells from dividing quickly and thus slowing the overall growth, but the cells do not return to their normal sizes,” Popescu said.

The SLIM instrument, which Popescu’s group developed, makes the cell testing possible by using optics and an active element made up of liquid crystals, much like those in computer projectors, which manipulates light.

“We believe that biology can benefit from quantitative tools that we use in engineering and physics. SLIM not only provides images of cells (similar to traditional microscopes), but also provides measurements of the cells, and in this case, their masses,” Popescu said.

“This microscope is unique in the fact that it allows researchers to look at living cells without staining them with chemical dyes, in high resolution and in real time. Researchers can look at cells without harming them—so as they actually are,” said Scott Robinson, manager of the Microscopy Suite. “We’re excited about the possibilities we’ll have to look more closely and noninvasively at all types of living cells.”

NSF and the Breast Cancer Research Foundation supported this work. Along with Mir, Popescu, and Katzenellenbogen, postdoctoral researcher Anna Bergamaschi was a co-author on this paper.