When it rains, it pours: A case study of Santa Fe 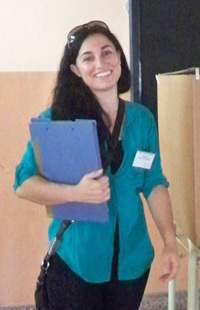 As a social scientist, most of April Colette’s research isn’t done in a lab, examining tiny atoms or MRI scans. Instead, her lab is "the world.” She meets people and listens to their stories, talks with policy makers, and studies the geographical features of a land, with the hope of offering solutions to better the lives of people who live there.

As one of Beckman’s Graduate Fellows, Colette is working with Jesse Ribot in Beckman’s strategic initiative, Social Dimensions of Environmental Policy (SDEP). In the five years she’s been working on her doctorate studies in geography, she’s spent half of her time in Santa Fe, Argentina.

Santa Fe, the capital city of the Argentine province of the same name, is known for its long history of flooding. Most recently, it suffered two major floods: one in 2003 and another in 2007. Colette focuses her research on the causes and effects of these floods.

During the floods, Santa Fe was devastated, with many inhabitants losing their homes and some even losing their lives. After living there, Colette began to understand how much the flooding—both from river water and rain water—has not only affected the geography and use of land in Santa Fe, but the attitudes and lifestyles of its people.

“Even today, when it starts to rain, there are people who begin to panic. They worry, ‘Is it going to flood again? What will I do? Where will I go?’” said Colette. “After a while interviewing people, spending time with them, and listening to story after story of flooding, I started feeling these same fears when it rained because of how panicked everyone else would be. I would hear the rain and wonder if the people who have shared so much with me were okay.”

When in Argentina, she spends her days meeting with flood victims and residents to collect data on their experiences, and she also meets with various policy makers and government employees to discuss what happened during the floods, current and ongoing structural and non-structural projects to manage flood risk, and the institutional changes that have taken place within the government since the 2003 flood.

Even today, when it starts to rain, there are people who begin to panic. They worry, “Is it going to flood again? What will I do? Where will I go?” — April Colette

“In Santa Fe, I met with national, provincial, and municipal government officials and reviewed government documents from those levels first,” Colette said. “Then using GIS data and government flood maps, I identified four neighborhoods having different experiences of flooding. I focused on residents of those neighborhoods and interviewed them along with politicians, state legislators, private sector engineers, and members of civil society associations, all of which helped to bring the bigger picture of the floods together.”

In her research, it is clear that natural factors only partly contributed to Santa Fe’s problems with flooding.

“It’s not just the rain or rivers that are causing the floods,” Colette said. “Floods happen in Santa Fe because the infrastructure does not operate as it should, or certain precautions aren’t taken. The city is described as a pan or bowl because rivers run on the both the east and west sides, and when the rain falls, it collects in the middle. So there are some geographical challenges, but drainage is not the only problem. There is a fundamental human element. In 2003, the government left a gap in the embankment, never finishing the project. Four years later, some pumping stations were still inoperative and for those that did work, the rain exceeded their capacity to remove the water,” Colette said. 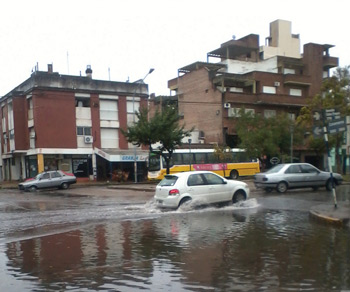 She intends to use this data and research to build proposals for policy changes in Santa Fe, though she hopes these policy changes will affect other cities worldwide. In essence, she is examining how all people understand climate-related vulnerability and risk, the factors that influence their understandings, and how their understandings influence the context in which citizens and the state respond to risk.

“If people’s understandings of risk and vulnerability are different than the government’s, there will always be a gap between state intervention and the effects on the ground. It demonstrates that people may not understand the logic of such an intervention and that government may not fully understand people’s needs. There needs to be equal understanding and expectations on both sides, with effective distribution of information, so that both parties understand how the city is better preparing for floods,” Colette said.

Colette has traveled back and forth between Argentina and the United States many times, and she loves the opportunity she has to travel as a geographer and ethnographer.

“Social science research is very unusual for researchers at Beckman,” Colette said. “Being in the field is everything. Your lab is wherever you’re studying, so it’s very important that I go to that place. One of my methods is ethnography, so living there, experiencing the culture, talking with the people—that’s what is most important. It makes for very rich, interesting research … I wouldn’t have it any other way.”