A change in command

Iwona Dobrucka has taken over as director of the MIL, and former director Wawrzyniec Dobrucki has received a tenure-track position in bioengineering. 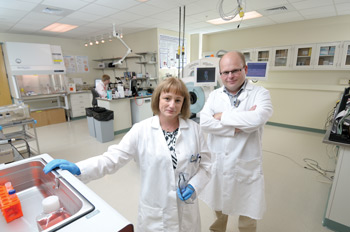 Wawrzyniec Dobrucki and Iwona Dobrucka, a husband-and-wife team at the Beckman Institute, are changing roles in the Molecular Imaging Laboratory (MIL), a state-of-the-art imaging lab within the Biomedical Imaging Center (BIC) at Beckman.

The lab was established in August 2010, and Dobrucki was asked to come aboard as director for his expertise in nuclear imaging with radioactive isotopes. Shortly after, Dobrucka joined the lab as a research scientist, and in just a few years, they made the MIL a place for leading-edge research, state-of-the-art imaging services, and student mentorship. Now, Dobrucki has been hired as a tenure-track professor of bioengineering and will use the lab as a researcher. Dobrucka has been promoted to director.

For the past few years, the two have worked together to build the lab from the ground up after a National Science Foundation (NSF) major instrumentation grant and Beckman Foundation funds assisted with the construction and equipment purchases. The lab features a multimodal microPET/SPECT/CT scanner, and it, like other facilities at Beckman, offers its services to any academic or industrial researcher. They have developed collaborations reaching from the Urbana-Champaign campus to international groups in Poland, Greece, and Germany.

“The MIL functions to serve our collaborators,” Dobrucka said. “We continually expand our services and update our capabilities in order to meet the researchers’ needs. In the beginning of our collaboration, they come to us with a problem, discuss their needs and availability of funding, and from that point we build the best imaging strategy for them, teach them how to use the equipment, and provide technical guidance along the way.”

Transitioning from a research scientist to director, Dobrucka says her duties changed quite a bit.

“Before, I was more focused on daily routine aspects of the lab and my research only. Now I work on global strategy of how to run the lab. I run various projects, contact the PIs, perform calibration tests, while continuing to look for new collaborations and develop new possibilities for grant writing,” Dobrucka said. 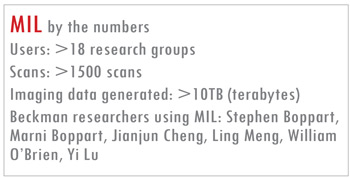 Both Dobrucki and Dobrucka also run their own groups through the MIL. Dobrucki, in conjunction with teaching, leads the Experimental Molecular Imaging Laboratory (EMIL), which is currently focused on developing novel targeted imaging probes to be used in the MIL.

“In our experimental lab, we’re developing new probes that address important human health problems,” Dobrucki said. “One of the probes images the process of angiogenesis, which is the formation of new blood vessels, and is a process implicated in the development of cancerous tumors and other cardiovascular pathologies.

“Another nanoparticle-based imaging probe will allow for multimodal imaging of novel biological targets in atherosclerosis and prostate cancer. This new strategy will allow for sequential in vivo imaging of atherosclerotic plaques with PET scanner and fluorescence microscopy of biopsied tissue samples. Currently, we’re using the MIL to evaluate these probes in animal models of human diseases.”

The opportunity to conduct their own research while still providing advanced imaging services is one of the benefits to running the lab.

“The MIL is unique in that sense—it provides a service for other researchers, but is also a place where we can run our own research groups,” said Dobrucki. “It fits nicely into the idea of an interdisciplinary laboratory at Beckman.”

Between the two, they have students representing many different disciplines, including bioengineering, molecular and cellular biology, and electrical and computer engineering, with whom they’ve had a great deal of success.

“We’ve had some wonderful experiences, especially with undergraduate research. One of our first undergraduate students was Matthew Schuelke, and we worked with him to create images of an angiogenesis response to a heart attack in diabetic rats that won the 2012 Siemens Translational Image of the Year award,” Dobrucka said.

Their tight-knit group has had success through collaboration and working toward common goals. Dobrucki and Dobrucka want their students to learn from one another, while also bringing a specific discipline into mix to introduce new insights, in order to develop the multidisciplinary atmosphere that Beckman was built upon.

“Molecular imaging is a combination of biology, physiology, chemistry, and engineering—it’s hard to find a person who has expertise in all those areas, so we want to bring students in to learn from one another,” Dobrucki said.