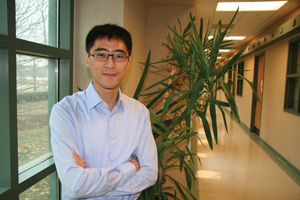 Looking at metabolites is extremely valuable in characterizing the physiological state of tissues and can enable detection of a disease, like cancer or Alzheimer’s, at very early stages. Magnetic resonance spectroscopy imaging (MRSI) incorporates magnetic resonance imaging (MRI) to noninvasively map concentrations of metabolites in the human body.

Chao Ma, a 2013 Beckman Postdoctoral Fellow, plans to create and develop advanced MRSI techniques that can better identify the metabolic functioning of tissues, particularly in the brain. Though the concept of using MRI for metabolic imaging has been around since the MRI was developed more than three decades ago, Ma is looking to improve it so it can be more widely used in clinical settings.

“MRSI measures the concentration of critical chemicals (metabolites) that maintain healthy cells and tissues,” Ma said. “This information helps us understand how energy is consumed and how healthy the tissues really are. If the concentration of one or several metabolites is lower or higher than normal, this indicates something is wrong with that tissue.”

Ma collaborates with Brad Sutton and Zhi-Pei Liang from the Bioimaging Science and Technology Group, and Yoram Bresler from the Image Formation and Processing Group. These professors have a variety of expertise in advancing MRI techniques, and Ma hopes that the collaboration between the three can push the limits of metabolic imaging so that seeing metabolic maps of tissues can be as clear and fast as possible.

Ma works with scientists in the Biomedical Imaging Center (BIC) to improve the metabolic imaging process by looking at the scan’s resolution, signal-to-noise ratio, and imaging speed. Right now, the capabilities of MRSI can only scan at a resolution of one centimeter, which is too large to see the metabolic functions of tissues. Ma is developing techniques for higher resolution images, measuring at the millimeter level.

Metabolic imaging adds another layer of information to traditional MRI scans that can offer insights into how brains age and why Alzheimer’s occurs, as well as identify biomarkers of precancerous cells. — Chao Ma

Developing high-resolution metabolic imaging is not easy though. In traditional MRI, the scanner detects signals from water, which composes a significant portion of the body. In MRSI, however, signals from metabolites are of interest, which are about a thousand times lower in concentration than water. Therefore, conventional MRSI is limited by very low signals.

One way to improve the images of metabolites is to average the results of many scans, but that would require the patient to be in the scanner for hours at a time. Ma hopes to develop new methods to gather data from a scan and better techniques to reconstruct the images to improve the signal-to-noise ratio without sacrificing imaging speeds.

Ma would like to use metabolic imaging techniques to complement Beckman’s already strong foundation in neuroscience.

“Beckman is the ideal place for my research. First, I’m able to work with Sutton, Bresler, and Liang on the technical part of enhancing metabolic imaging,” Ma said. “And then, because of the interdisciplinary atmosphere here at Beckman, I can apply my metabolic imaging process to aid other projects, like research in Art Kramer’s and Neal Cohen’s labs about healthy aging. Metabolic imaging adds another layer of information to traditional MRI scans that can offer insights into how brains age and why Alzheimer’s occurs, as well as identify biomarkers of precancerous cells.”

After successful implementation in research, Ma believes that a new scanning technique such as MRSI could be a powerful tool in the push for early detection of many diseases or as a tool for personalized medicine. In routine check-ups, metabolically abnormal tissues could be identified and quickly treated, and then a subsequent scan could test whether the treatment has affected the metabolic functions in a positive or negative way.

“Though the idea of metabolic imaging has been around for a while, it is finally becoming a reality so people can take advantage of it,” Ma said.