Husain determined to help those with tinnitus

Fatima Husain has spent several years studying the causes and effects of tinnitus, a hearing disorder characterized by a ringing in the ears, and her plans moving forward are to utilize interventions to help those affected by it.

If one thing can be said about Fatima Husain, it’s that she has an unwavering passion for asking questions. And once she asks those questions in her research, she makes it her mission to find concrete and quantitative answers.

In her more than five years at the Beckman Institute, Husain has made exponential progress on the research and the documented knowledge of tinnitus, a disorder associated with hearing loss and characterized by a ringing in the ears (or other phantom sounds with no external source). The biggest trigger for tinnitus appears to be hearing loss, but not all people who have hearing loss develop tinnitus. 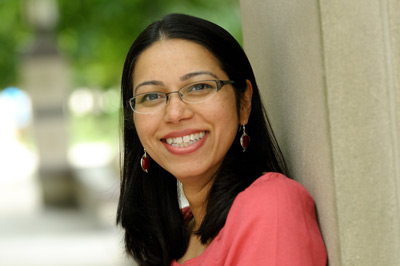 Her most recent research focuses on determining the emotional processing, attentional processing, and intrinsic or resting-state networks of people who experience tinnitus by performing magnetic resonance imaging (MRI) of the brain in the Biomedical Imaging Center (BIC). Her studies look at how and when people pay attention to their tinnitus and how they are cognitively affected when they can’t control it or pay attention to anything else.

“When you get stressed out or can’t tune [tinnitus] out, it becomes the most dominant sound, and that’s really awful. It interferes with communicating with others, it interferes with sleeping. So people use noises to mask it, and in some cases it works, but sometimes it doesn’t,” Husain said.

When people are unable to mask the sound, it becomes an emotional burden.

“There’s depression, anxiety, and the more you become distressed about it, the harder it is to deal with it,” said Husain. Accompanying her research on the internal workings of the brain and tinnitus are her studies on interventions to help tinnitus sufferers cope with the condition.

One method that can help is regaining a sense of control, says Husain. “The worst thing for people is that they’re unable to control it. When people are successful in every other part of their lives, but they can’t stop the sound, it’s hard for them,” Husain said. “There are no pills you can take and there’s no switch to turn off—you literally have no control. So how do we regain the sense of control? How can we make peace with it?”

Helping participants in her study accept that the noise exists and coming to terms with it allows them to gain control over the sound.

Another way to help people understand tinnitus is by pinpointing what is going on in the brain, which Husain tries to do in her research.

The worst thing for people is that they’re unable to control tinnitus. When people are successful in every other part of their lives, but they can’t stop the sound, it’s hard for them. There are no pills you can take and there’s no switch to turn off—you literally have no control. So how do we regain the sense of control? How can we make peace with it? - Fatima Husain

“As of now, there isn’t a brain scan that anyone can point to and say, ‘This person has tinnitus.’ We can’t determine what level of tinnitus severity people have, or necessarily why they have it. In the next five to 10 years, we want to find a way to say, ‘We know what part of the brain is being affected, and here it is.’ This helps people gain some of that control,” she said.

A pharmaceutical cure to tinnitus would be the obvious answer, but Husain says research still has much to understand about the brain and how the emotional associations of tinnitus will affect the brain, even if drugs relieve the noise production. However, the intention of her research is to understand the nature of tinnitus in depth, so as to learn how to better treat it.

For her next round of research, she intends to look at how exercise might positively affect those with tinnitus.

“We have plenty of outside research about how exercise positively affects cognitive health, and we’re getting stories from patients about how exercise has helped them come to terms with their tinnitus. So we’ll be studying the correlation between the two and if it pans out, we will actively test exercise as an intervention,” Husain said.

As part of her research on tinnitus, Husain also helped create the Initiative on Communication and Aging Research (I-CARE), a Spring 2013 program funded by a Focal Point grant from the Graduate College at the University of Illinois, which created a forum to facilitate the study of aging and communications by bringing together an interdisciplinary group of faculty and graduate students.

The organizers, Christopher Grindrod and Husain, were aided by graduate students Jake Carpenter-Thompson and Sara Schmidt, in conducting semi-monthly meetings to discuss the latest research on communications and aging. Other faculty associated with the grant include Dan Morrow, Liz Stine-Morrow, Kara Federmeier, and Raksha Mudar. They also hosted four seminars with world-renowned speakers who lectured on their particular research related to communication and aging. Topics for both the meetings and seminars included how hearing loss, dementia, stroke, Alzheimer’s, etc., affect social and health communication in an aging population.

Husain’s goals are many. She wants to learn more about the neurological make-up and reason for tinnitus and how better to conduct interventions and impact patients in a beneficial and meaningful way. She knows it will be difficult, however, because of the wide range of experiences with tinnitus.

“The main thing which bedevils understanding neuro-psychiatric populations, including the tinnitus patient population I study, is the great heterogeneity of the population,” said Husain. “When you are studying normal populations, you can maintain the illusion that every normal person behaves the same way. You cannot do this when you are studying a disorder. To paraphrase what Tolstoy said of unhappy marriages, every person with tinnitus is unique in his or her own way. My hope is that we develop better imaging and data analytical techniques to discover what is invariant across this vast multitude of differences. When we are able to integrate that information and parse into sub-types, which do vary from the norm for the disorder, we will understand better how to treat it.”

The road ahead will undoubtedly be full of questions for Husain, followed by an eager pursuit of the answer. However, the most important goal she hopes to achieve during her lifetime is quite clear.

“I want to contribute ideas that I discovered in my own work—not outside sources but my own research—and I want the new knowledge to contribute to others’ lives. I want it to help other people.”