William, "Bill," Greenough, faculty member in the Neurotech Group, and professor emeritus in the Department of Psychology, has died. Greenough was instrumental in crafting the proposal that led to the creation of the Beckman Institute. 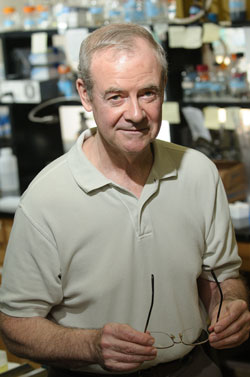 Greenough first joined the University as an instructor in 1968, finishing his Ph.D. in psychology from UCLA and becoming an assistant professor here in 1969, later becoming a full professor in 1978. He was Swanlund Professor in the University of Illinois departments of Psychology, Psychiatry, and Cell and Developmental Biology, and served as Director of the Center for Advanced Study at Illinois. He served as co-chair of the Biological Intelligence research theme at Beckman, which served as home to the William Greenough Laboratory since the Institute first opened its doors.

As a researcher, Greenough had been a leader in changing scientific thinking when it comes to nervous system development and the brain. He helped take the concept of brain plasticity from theory to experimental proof to accepted science.

Greenough won many teaching, professional, and research honors and awards over the years, including an appointment to the National Academy of Sciences, the American Psychological Society’s William James Award, the American Psychological Association’s Distinguished Scientific Contribution Award, the Society for Research into Child Development’s (SRCD) Distinguished Scientific Contribution Award, and the FRAXA Research Foundation Dedication Award.

For more information on Greenough, please read this article celebrating his career.