Mice Selectively Bred for Increased Physical Activity: An Animal Model for ADHD?
Selective breeding is a powerful tool to produce extreme behavioral phenotypes. We have been conducting a selective breeding experiment for increased levels of physical activity in the home cage for more than 14 generations. One line (High-Active) is subjected to selection for increased total distance traveled in the home cage, while the other line (Control) is randomly bred, unselected. Distance traveled in the home cage has increased from approximately 0.3 km/day in Controls to 1.5 km/day in High-Active. The goal of this study was to begin to characterize the pharmacological responses of the High-Active mice to d-amphetamine to determine whether the lines may be useful as an animal model for attention deficit hyperactivity disorder (ADHD).  High-Active mice receiving chronic, daily administration of therapeutic doses of d-amphetamine from adolescence through adulthood displayed reductions in home cage hyperactivity, whereas Control mice displayed increased activity from the d-amphetamine. Currently we are evaluating the High-Active mice for performance on a go/no-go task that measures impulsivity and inattention, hallmark features of ADHD. Preliminary results suggest the High-Active mice could be a useful model for elucidating the underlying neurobiology, pharmacology, and genetic correlations between hyperactivity, inattention, and impulsivity.

Improving Classification Rate for a Visually-Controlled Brain-Computer Interface
Brain-machine interfaces utilizing noninvasive recording techniques offer a new way for physically disabled individuals to interact with the world around them. Such systems also offer novel user interfaces that may benefit a wide range of people. A critical component of improving the usability of such systems is improving the speed and accuracy with which decisions are made. As the quality of the recorded data may vary with user fatigue, user attention, and environmental noise, a fixed classification scheme is not optimal. We propose an adaptive scheme to classify data from a brain-computer interface using Steady-State Visually Evoked Potentials. Our adaptive classification scheme improved the information-transfer rate of this brain-computer interface by an average of 43 percent over three subjects. An adaptive classification scheme can improve the speed and accuracy of classifying EEG data, allowing for improved usability of brain-machine interfaces. 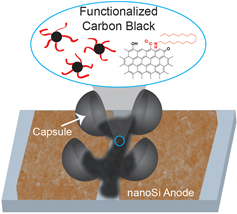 Damage triggered release of microencapsulated conductive core materials has enabled autonomous restoration of electrical conductivity in a broken circuit. In contrast to electric circuit, battery electrodes are composite materials consisting of active particles such as silicon and a polymer binder. Conductive carbon black nanoparticles are often added to the electrodes to fill the interstitial regions and increase electrical conductivity. Silicon anodes undergo enormous volume expansion and contraction (420 percent volume change) upon lithium insertion and extraction. Continued cycling results in cracking or pulverization of the Si, and ultimately destruction of the conductive network. Motivated by the potential for autonomous restoration of conductivity in damaged battery electrodes, we investigate the encapsulation and release of carbon black suspensions. We develop two surface functionalization methods to attach hydrophobic octadecyl chains on carbon black surfaces, which lead to stable carbon black suspensions in o-dichlorobenzene, enabling encapsulation. Hydrophobic surface functionalization of carbon black and the addition of core thickeners are both critical for achieving stable microcapsules capable of significant particle release and efficient conductivity restoration.