The new scientists on the block

Three of the six 2013 postdoctoral fellows settled in this summer and are laying the groundwork for exciting new research. 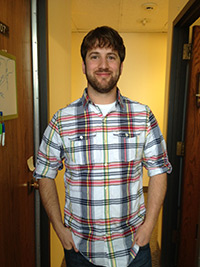 Before he walked through the doors, Nathan Medeiros-Ward had already had a close connection with Beckman Institute. He first heard about it through his advisor at the University of Utah, David Strayer, who previously worked under Art Kramer, director of Beckman. “So in a way,” Medeiros-Ward said with a laugh, “Art is my academic grandfather.”

Now, Medeiros-Ward has joined the coveted group of postdoc fellows at Beckman and is able to do what his advisor did: work collaboratively with Kramer and other top researchers in a leading-edge interdisciplinary research facility.

Medeiros-Ward completed his Ph.D. at the University of Utah in the spring and began his fellowship shortly after. Only a few months into his research, he’s already fostering many collaborative studies with four researchers—Kramer, Aron Barbey, Alejandro Lleras, and Dan Simons.

“Beckman offers something that a lot of other postdoc opportunities do not,” said Medeiros-Ward. “Normally in postdocs, you only work with one professor, in one lab, with their specific techniques. What is unique about Beckman is that it’s very interdisciplinary. To get to work with several different collaborators is quite exciting. In addition, it was really easy in grad school to forget about methods and applications outside of my specific area. Beckman encourages breaking traditional boundaries and collaborating across the disciplines.”

His research focuses on learning more about multitasking and knowing how shifting and dividing attention are similar and different in various laboratory and real-world contexts, as well as whether or not these abilities can be trained.

“I’m looking at many aspects of multitasking,” said Medeiros-Ward. “I’m asking questions like, “If you were really good at switching between tasks, would you be good at doing two tasks at the same time? And then, how is that mapped out in the brain? Or can we train people to multitask? Would it be possible to teach people how to shift and divide attention?”

Although his research is just beginning, Medeiros-Ward has hit the ground running at Beckman, a sure sign of his future success. 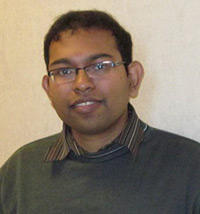 If anyone understands how much he can accomplish at Beckman, it is Abhi Singharoy. His work in the next three years, in collaboration with full-time Beckman researcher Klaus Schulten, will be to bridge x-ray crystallography and molecular dynamics simulations (MD), “two very distinct yet complementary fields” to create a program that will accurately determine all-atom structures of hitherto unresolved or poorly resolved biological systems, a feat that can redefine the field of low resolution x-ray crystallography, said Singharoy. His interest for these fields started as a graduate student.

“In theoretical chemistry at Indiana University I was fortunate enough to receive an education in two modern fields, biophysics of viruses and multiscale simulation,” Singharoy said. “I caught great interest and love for these interdisciplinary areas that combine the physical sciences, the life sciences, and computational science.”

X-ray crystallography is a process that uses x-rays to diffract on crystals in order to determine atomic and molecular structure. MD is a computer simulation on the physical movements of atoms and molecules based on Newton’s equations of motion for a system of interacting particles. Putting these two processes together by using MD to derive crystal structures is what Singharoy has coined as xMDFF, which is in part based on the highly successful method for structure determination called Molecular Dynamics Flexible Fitting (MDFF).

“I am working with Beckman researchers to extend MDFF to interpret low-resolution structural information from x-ray crystallography experiments in terms of all-atom models,” Singharoy said. “Professor Schulten has developed the revolutionary MDFF method for structure analysis that I would like to extend from electron microscopy to low resolution x-ray scattering structure determination (xMDFF).”

With this new technology, Singharoy will focus his immediate efforts on investigating transport across cell membranes. His long-term goal is to create new materials, like new or safer vaccines, by determining their atom-level structure.

It is clear Singharoy has very specific plans to carry out in his time here, and thanks to the researchers and world-class capabilities at Beckman, he is sure to make ground-breaking discoveries. 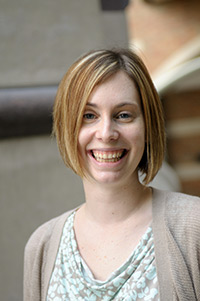 Finding a passion, and then taking the appropriate steps to excel at it is the key to any career. Renee Sadowski knows that she has a knack for toxicology and neurotoxicology, which both study the adverse effects of chemicals on living organisms.

After completing her Ph.D. in neuroscience at the University of Illinois, she wanted to continue her work as a postdoctoral fellow.

“I decided to work at Beckman because the opportunities provided by the postdoctoral fellowship and collaborative environment,” Sadowski said. “Through the training grant in toxicology that I received in my last few years of graduate school, I became interested in neurotoxicology because of its high relevance to human health.

“I am working with Susuan Schantz, who has current data that suggests that early exposure to PCBs in rodents can result in increased seizures in response to loud noise. I am also working with Daniel Llano, who has published studies using the flavoprotein autoflourescence technique. This technique measures the activation in a brain region in response to electrical stimulation of another brain area.”

In her current study, she will be combining the knowledge and expertise of Schantz and Llano to measure differences in activation of the auditory cortex and hippocampus by use of the flavoprotein technique in adulthood after developmental exposure to PCBs.

“This project contributes to my research goals, which are to continue training in neurotoxicology while also employing techniques that have not been previously applied to the field,” Sadowski said.

Her long-term goals are to keep getting better at what she loves: “a career in academia where I can continue to characterize the neural basis of how toxicants contribute to increased susceptibility to developmental and adult neurological disorders.”