Running a human psychology experiment can be just as educational as attending classes, according to some of those doing the day-to-day laboratory grunt work that turns hypothesis into data and, eventually, research papers. 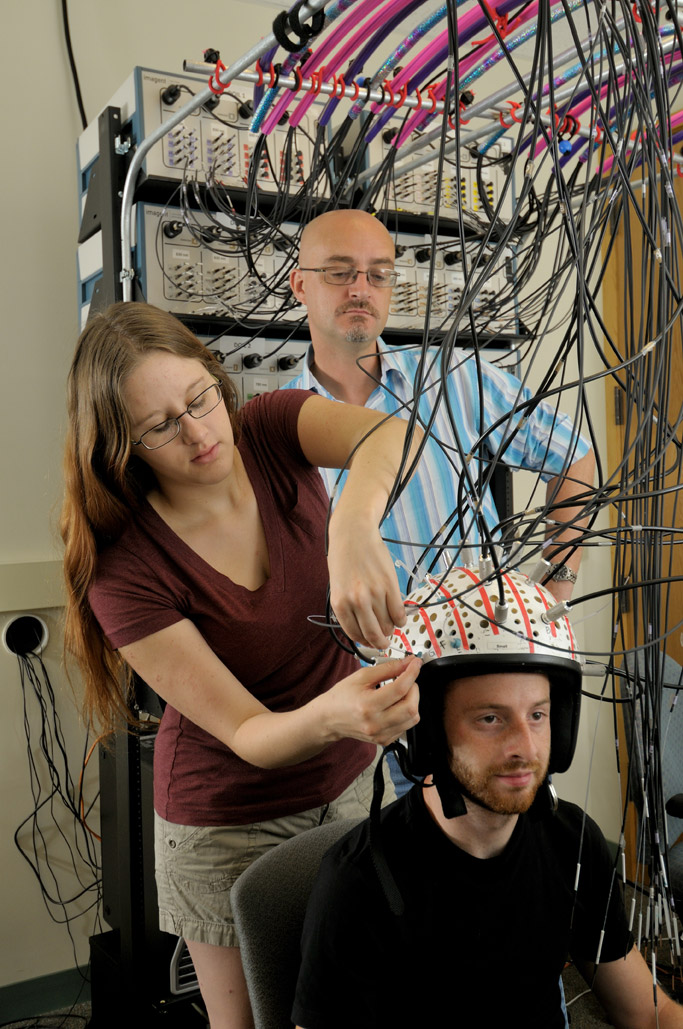 They toil in windowless rooms full of strange contraptions sprouting dozens of tendrils of black spaghetti-like cables. They are working with people unsure of their surroundings and starting to wonder why they ever agreed to take part in a human psychology experiment. The students and other research lab members who run those experiments are calming fears, adjusting equipment, and gathering data. They are also getting an education not found in the classroom.

Running a human psychology experiment can be just as educational as attending classes, according to some of those doing the day-to-day laboratory grunt work that turns hypothesis into data and, eventually, research papers.

Jenessa Seymour is earning a Ph.D. in the Neuroscience Program at the University of Illinois, working with deaf populations in Beckman researcher Matt Dye’s Cross-Modal Plasticity Laboratory. They are using the new neuroimaging system in the Diffuse Optical Imaging Laboratory (DOIL) at Beckman to study the effects of deafness on visual functions at the behavioral and neural levels. It is a far different lab experience than Seymour had as an undergraduate in upstate New York.

“I did experiments but they were mostly paper and pencil,” Seymour said. “You had to get very creative because we didn’t have equipment. Beckman is a whole other world.”

But the biggest learning curve for Seymour has been working with a population she had never encountered before, the hearing impaired.

“It gives you a very interesting perspective on a very unique culture,” Seymour said. “It’s really interesting to hear the way they use language; it’s very different from ours. People have this misconception that ASL is just signs for English words and that it’s English grammar, but it’s totally different. It has its own grammar and they have their own way of communicating.”

Dye requires his students to learn sign language in order to work in his lab. Seymour is now in her third semester of learning ASL, and does give some instructions to the deaf participants.

“In a lot of ways it can be more efficient sometimes, such as describing directions,” she said. “It is very visual. As far as the neuroscience goes, that comes more from reading the articles. But the interest in the culture comes from meeting local deaf people and communicating with them.”

Those kinds of interactions are the types of experiences student researchers get when they begin working with human subjects in a lab. Beckman Institute Director Art Kramer knows about that experience from both ends, from his student days at the University of Illinois to overseeing a wide variety of research projects involving cognition and human factors over the years as a human factors and neuroscience researcher. He said the lab teaches lessons that can’t be learned in the classroom.

“Students who work in labs that focus on human experimentation on issues such as the nature of memory or attention, or the influence of lifestyle factors on brain and cognition, get to learn about science as it actually occurs, rather than the often sterile description of science that is offered in textbooks,” Kramer said. “Advances in science often take place in fits and starts rather than along a linear path.  However, the ‘messiness’ of scientific experimentation is what makes it an enjoyable and challenging endeavor.”

Students and laboratory personnel deal most often with other students as study participants, but due to Beckman research in areas like aging, speech, and the effects of exercise or distraction on cognition, many are working with participants of all ages and backgrounds. That work can involve calming the concerns of an older study volunteer, or hooking up a bundle of wires to a child on a treadmill. Aubrey Lutz is the Lab Manager for Kramer’s Lifelong Brain and Cognition Laboratory, specializing in experiments done at Beckman’s Illinois Simulator Laboratory.

As part of those experiments, Lutz has worked with children and older populations, as well as college students. Many of the experiments done in ISL’s CAVE – a 3-D immersive, virtual reality environment – have involved a modified treadmill featuring wall screens displaying a city intersection for testing topics such as pedestrian distraction. The experiments have involved subjects of almost all ages.

“It is a very different experience in terms of the interactions I have with the subjects,” Lutz said. “The children are the most enjoyable. Those conversations were the most fun and entertaining. The college age subjects are the lowest maintenance. They pick up on tasks very quickly.”

ISL director Hank Kaczmarski said the studies involving children can be the most challenging for one reason.

“They have their parents and sometimes their siblings because there is no babysitter,” he said. “It’s a little more complicated than just having a student show up.”

Seymour hooks up test subjects wearing a helmet with sensors to an optical imaging system. Her job also requires her to analyze data, as well as scheduling test times and recruiting participants, not an easy job in a smaller community like Urbana-Champaign. But one of the most challenging tasks is to give directions and to communicate other information to the deaf participants.

George Kartheiser, who is deaf and is fluent in ASL, was the Visiting Research Coordinator in Dye’s lab before leaving this summer to earn a Ph.D. at Gallaudet University in Washington, D.C. Seymour said it will be tough to replace him.

“That’s actually an issue we are working on right now,” she said. “With Geo in the lab, he would usually be the one to explain directions. If I was explaining to the hearing people in my native language, then went and explained the directions to a deaf person in my garbled ASL, that could seriously impact things.

“Plus, if I’ve got both my hands busy working on the helmet, I can’t talk to them too. No matter how good my signing gets if I don’t have my hands free, I can’t sign.”

Shosted is an experimental phonologist who studies the aerodynamics of speech, using an oral mask to study air as flows through the vocal tract. Husain has a soundproof room for behavioral experiments looking at auditory, speech, and language processing in the brain. Shih uses a 3-D electromagnetic articulometer – a cube-like clear plastic device placed over the shoulders and head – to measure physical movements during speech production.

All of this advanced equipment and cutting-edge research lines require students and research associates to make them work.

“It can be a little intimidating because there are so many people doing advanced stuff at Beckman, it’s insane,” Seymour said. “It’s all the stuff I read about as a little kid and thought was so cool. Having all those resources available means anything you can dream up, any study you can think of, there is a way to do it at the Beckman.”

It also means a different kind of experience for the students and others in the labs at Beckman, and elsewhere on campus.

“It’s been really great for my people skills,” Lutz said. “I feel like I can talk to any person anywhere.”

“She gets a master’s in psychology, just for doing this,” Kaczmarski said with a laugh.

“That would be awesome,” Lutz said.