Beckman alumni Melissa Duff is one of many young neuroscience and psychology researchers who have taken both the research lines pursued and interdisciplinary lessons learned at the Institute to seed their own programs and careers in academia and the business world. 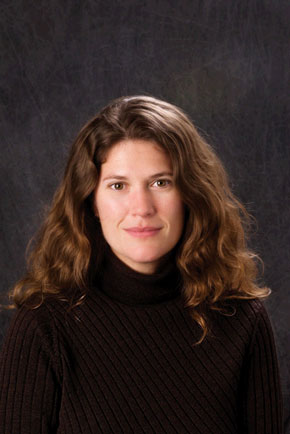 For more than two decades young neuroscience and psychology researchers have taken both the research lines pursued and interdisciplinary lessons learned at the Beckman Institute to seed their own programs and careers in academia and the business world. University of Iowa professor Melissa Duff is a perfect example.

Duff said she learned a lot from Beckman neuroscience researcher Neal Cohen during her time at the University of Illinois, where she earned a Ph.D. in Speech and Hearing Science. She also gained an education in the interdisciplinary approach to research that guides Beckman, and collaborations that continue to this day, including with Cohen.

“Although my degree came from another department, Neal has had a profound impact on my work and career,” said Duff, who is also certified as a speech and language pathologist. “My interests and research are interdisciplinary, bringing together the study of memory and language from both a clinical and basic science perspective.”

An important part of Cohen’s research seeks to understand what is going on in the brain by investigating how it works when things go wrong, such as in the memory systems of amnesiacs. It was an approach that proved valuable for Duff when it came time for her doctoral thesis work in speech and hearing science.

“When I started my program at Illinois, I was interested in looking at the contributions of memory to language use and communication and how individuals with brain damage exploit their memory and learning abilities to facilitate rehabilitation and recovery,” Duff said. “My thesis turned out to be a project right at the intersection of these two questions.

“We demonstrated that patients with profound memory impairments can show normal and enduring learning for referential labels across a series of collaborative and interactive sessions with a communication partner, but that close examination of their discourse reveals a number of striking disruptions compared to speakers without brain damage.”

Along with an interdisciplinary approach, making a real-world impact is another hallmark of the Institute and that also is true for Duff. In 2011 she founded the Iowa Traumatic Brain Injury Registry for gathering and analyzing neuropsychological, neuroanatomical, and empirical data from experiments of memory, learning, language, driving, and other domains. Duff said the goal is to improve the quality of care provided to individuals with traumatic brain injury.

“Working with individuals with memory impairments is important to my work and to me,” Duff said. “Before I came to the University of Illinois, I was a speech-language pathologist and I worked with many clients with traumatic brain injury and dementia.

“The lack of theories to account for the difficulties they were having using language and communicating and the lack of effective interventions to improve their everyday functioning are what motivated me to go back to school.”

Today, Duff is working on both theory and practice. Her research interests include the cognitive processes and neural substrates supporting real-world learning, complex communication, and social interaction. She continues to publish papers with Cohen, as well as with Beckman faculty member Sarah Brown-Schmidt from the Cognitive Science group.

“My work at the Beckman laid the groundwork for the bulk of my work today,” Duff said. “My work with Neal and Sarah are extensions of the work I began during my thesis. Sarah and I are both interested in language processing and communication. Bringing together my expertise in the study of memory and language and her expertise in language and eye-tracking, we just got an NIH grant to examine the contributions of memory to language use and processing.”

“These findings are important because they tell us something new about the role of memory in language use, but also because they will change how we approach treating these language impairments knowing the real underlying source of the deficit,” Duff said.

Duff is also looking to collaborate with another Beckman expatriate who just joined the Iowa Department of Psychology, Michelle Voss. A former Beckman Fellow, Voss also does neuroscience research.

“We are meeting frequently and have lots of ideas for collaboration!” Duff said. “I’m really looking forward to working with Michelle.”

A collaboration that will, no doubt, sprout more research lines from seeds planted at Beckman.