Beckman Institute researcher William King and his collaborators have developed a thermochemical method that offers unique advantages for nanopatterning, especially in the area of protein and DNA nanolithography, as reported in the Dec. 9 cover story of the journal Advanced Functional Materials. 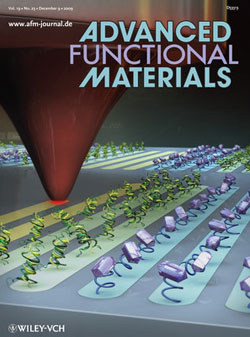 Beckman Institute researcher William King and his collaborators have developed a thermochemical method that offers unique advantages for nanopatterning, especially in the area of protein and DNA nanolithography.

They reported their findings in a paper titled Thermochemical Nanolithography of Multifunctional Nanotemplates for Assembling Nano-Objects that was published in the Dec. 9 issue of the journal Advanced Functional Materials. An image accompanying the article rendered by Alex Jerez, Zach Johnson, and Eric Shoemaker of Beckman’s Visualization Laboratory earned the cover of the journal.

King, a Professor of Mechanical Science and Engineering and member of Beckman’s 3-D Micro- and Nanosystems group, has a research focus on the thermal properties of materials, as well as the design, fabrication, and use of innovative tools for thermal and thermo-mechanical processing at the micro- and nanometer scales. It’s work that has been applied toward manufacturing applications in a number of industries.

The current paper looks at the challenges faced in the nanoscale biotechnology and science realms when it comes to, as the authors write, manipulating and controlling “the surface positioning of individual proteins, nanoparticles, and other complex nanostructures.” They add that “achieving this aim would greatly facilitate the development of protein chips with single molecule detection capability, nanoelectronics devices, and to assist in fundamental studies of complex cell–cell and cell–matrix interactions, such as the formation of immunological synapses and focal contacts.”

Their research seeks to advance nanopatterning capabilities for inorganic nano-objects, particularly in the area of protein and DNA nanolithography, and especially for features below 100nm.

Their technique for nanoscale chemical patterning of different chemical species (amine, thiol, aldehyde, and biotin) applies thermochemical nanolithography (TCNL) in order to, as they write, “inscribe amine patterns followed by their chemical conversion to other functional groups. Due to the unique chemical stability of the patterns, the resultant substrates can be stored for weeks and subsequently be used for covalent and molecular recognition-based attachment of nano-objects using standard chemical protocols.”

The method not only offers advantages for below 100nm nanopatterning but also has advantages over self-assembly techniques in its ability to create specific patterns.

“In particular,” the authors, write, “the ability of this method to attach proteins and DNA to the chemical nanopatterns and to create co-patterns of two distinctive bioactive proteins is demonstrated.”