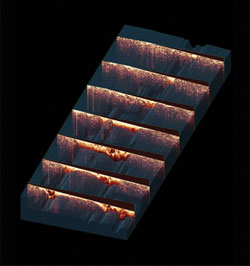 A series of OCT images acquired across a three-dimensional surgical margin that is positive for tumor.

It has been more than six years since Beckman Institute researcher Stephen Boppart first began imaging tissue samples using an optical method he had been developing for breast cancer diagnosis. The first paper reporting on a clinical study of the validity of Boppart’s method is the cover story in the Nov. 15 issue of the American Association of Cancer Research’s journal Cancer Research.

The paper, titled Intraoperative Evaluation of Breast Tumor Margins with Optical Coherence Tomography, appears as the cover story online in the journal and the print edition and reports that the system has in fact proven accurate and viable as an operating room diagnostic tool for the important mission of assessing tumor margins in breast cancer surgery.

“It’s been one of the longer investigations that we’ve done because these are clinical studies,” Boppart said. “It’s very rewarding because this is where we wanted to be all along. But we also recognize this is just a start. We’ve got a lot more work to do and a lot more questions to ask.”

Boppart is senior and corresponding author of the paper, while lead author is Freddy Nguyen of Boppart’s research group. Other co-authors include Boppart research group members as well as medical personnel at Carle Foundation Hospital, where the clinical studies were conducted.

It’s very rewarding because this is where we wanted to be all along. But we also recognize this is just a start. We’ve got a lot more work to do and a lot more questions to ask.
– Stephen Boppart

This first clinical study involved using, for the first time anywhere, an optical coherence tomography (OCT) imaging system as an intraoperative (within the operating room during the procedure), real-time diagnostic tool for assessing tumor margins in breast tissue. The paper reports that, when correlated with post-surgical findings of pathologists, the accuracy of the OCT system’s results were validated by the histology data.

The authors report that the intraoperative OCT system showed 100 percent sensitivity and 82 percent specificity for determining margin status, either positive or negative, for cancerous cells. Boppart said that a positive margin means there are tumor cells at a cut surface, a close margin means they are within one millimeter of that surface, and a negative margin that they are greater than one millimeter away.

The ongoing project has had more than 75 participants to date, with 37 patients involved in this study, including 17 in a patient training set and 20 patients – all of whom had a biopsy-proven breast tumor – for the study of the intraoperative procedure.

The advantages of the OCT system, as the authors write, are that it “provides surgeons the ability to assess margin status in real-time, complementing current gross visual examination, potentially reducing the number of positive/close margins discovered post-operatively, and thereby reducing the need for additional surgical procedures.”

Boppart, who is also an M.D., Co-chair of Beckman’s Integrative Imaging research theme, and professor in the departments of Electrical and Computer Engineering, Bioengineering, and Medicine, at Illinois, said the ability to quickly and accurately assess tumor margins in the operating room is an important capability the OCT system brings to the fight against breast cancer.

“I don’t think it will ever replace histology as the gold standard,” Boppart said. “Histology, with its resolution and staining, is really what is used to make the final diagnosis. However, histology has limits in terms of how much it can sample, how long it takes, and how much it costs.”

Boppart said that histology assessments performed after surgical lumpectomy procedures find positive margins between 10 percent and 30 percent of the time. He said that with histological methods, tumor margins are often under-sampled, sometimes missing positive margins, and often with a return to the operating room for a second resection procedure for the patient.

“And this is found a day later after the surgery has ended,” Boppart said. “It means that the patient has to come back for another procedure, with all the risks and costs associated with that, and all the anxiety.

“Another downside for the patient is if there are any tumor cells left behind. These patients are likely to relapse, as there is a fairly high local recurrence rate of tumors that grow back in that area.”

The authors write that, by using the OCT system, “intraoperative identification of positive margins will decrease the need for additional surgical procedures and the rate of local recurrence in breast cancer patients.”

Boppart sees the future of the OCT system as one where surgeons use a device to guide them during the procedure.

“We’re not quite there yet but the technology is such that we could acquire this data in real time,” he said. “The idea would be to have a wand or hand-held probe you pass over the margin and basically sample a much, much greater percentage of that margin than histology ever does.”

Boppart started working with OCT technology in 1993, and began to acquire breast tissue samples for imaging their optical properties in 2003. In 2005 protocols were approved to take a portable system into operating rooms at Carle and start looking at tissue in order to show the type of images that could be used by a surgeon.

Since it is an experimental technique, the surgeons are not currently using the OCT information to dictate surgical procedures. But the initial results are exactly what Boppart was hoping for when he began this research line several years ago.

Boppart said the project has had more than 20 people working on it, including his co-authors, oncologists, surgeons, pathologists, and nurses. In addition to Boppart and Nguyen, co-authors of the paper include Adam Zysk and Eric Chaney of his group, and breast surgeons Jan Kotynek and Uretz Oliphant and medical oncologists Kendrith Rowland and Patricia Johnson of Carle.

“There are many logistics with recruiting patients, and working with a whole new set of investigators to get the clinical data and correlate it with our image data,” he said. “In addition to myself, a team of students and researchers at Illinois, and other physicians, there is the support staff at Carle, the research coordinators, nurses who help with getting patient’s consent, surgical staff, pathologists, and technicians who all help to make these studies possible.”