Kenneth Watkin is a member of Beckman’s Bioimaging Science and Technology group who works to improve the health of people through advances in biomedical imaging methods and technology. 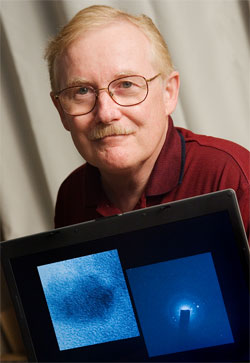 Kenneth Watkin, Photo by L. Brian Stauffer, U of I News Bureau

Kenneth Watkin wants to improve the quality of life for older adults, for American soldiers on the battlefield, and for cancer patients undergoing drug therapies. Actually, Watkin hopes his work involving biomedical imaging can help many more people than just those in the groups listed above but those three research lines are prime examples of why Watkin is doing his groundbreaking work in the first place: to help improve people’s health in very real ways.

“That’s the principle driving force for all of the things that I do,” Watkin said. “The college that I’m in, Applied Health Sciences, that’s the goal of all of us in the college, to try and increase the quality of life of individuals in the world. That’s the principal reason I got into this. I liked medical imaging and the physics of medical imaging because it helped me to understand how to image individuals with problems and help improve the health of our citizenry.”

Watkin is a Professor in the Department of Speech and Hearing Science in the College of Applied Health Sciences and a member of the executive board of the College’s Center on Health, Aging and Disability. He is also a member of the Bioimaging Science and Technology (BST) group at Beckman and directs the Targeted Imaging Laboratory at the Institute.

Through his lab and with collaborators at Beckman, Illinois, and elsewhere, Watkin is both advancing biological imaging methods and creating real-world solutions to medical issues. Creating a battlefield helmet for monitoring brain injuries is one example. The concept sprung from Watkin’s desire to help the large number of soldiers who have suffered traumatic brain injury due to weapons like roadside bombs; it took flight during a discussion with Electrical and Computer Engineering professor Ravi Iyer.

The college that I’m in, Applied Health Sciences, that’s the goal of all of us in the college, to try and increase the quality of life of individuals in the world.
– Kenneth Watkin

“As a biomedical engineer, I said this would be really straightforward. You just have a helmet and take pads and embed sensors in those pads and incorporate that with small nanocomputers that we have today. Ravi said we could do that – biosensors embedded to get real-time information about the physiology of the brain. A lot of the technology is already available; it’s integrating it and making it work in a short time period.”

Watkin and Iyer submitted their idea to the Army for one of its Concept Awards; out of 450 submitted their proposal was one of 21 chosen for funding and now the project is fast-tracked toward development of a prototype, perhaps as early as October. Watkin said he wanted to create something that would help the individual soldier.

“The overriding concern of being in the applied health sciences is that I worry about health,” he said. “It’s a great thought to be able to pull together a system that will help the soldiers maintain their health.”

The technology could also be applied to other medical problems.

“This type of monitoring is important for all kinds of health,” Watkin said. “Many people have chronic conditions, cancer, or heart conditions, respiratory, cardiovascular. This type of monitoring that we’re seeing in the helmet can actually be transferred into other types of health-related disorders that aren’t acute but are related to your long-term health and well-being.”

The helmet project is just one of several to which Watkin is currently devoting his time. He has been focusing for the past several years on developing image-guided drug delivery technology and has been working with fellow BST group member Stephen Boppart on the development of an optical imaging system for non-invasive or minimally invasive biopsies and surgeries.

Toward that end, Watkin has designed and applied for a patent on a nanoparticle or nanocarrier composed of a bi-layer lipid sphere that holds two complementary compounds that enhance the power of the chemotoxins inside. The carriers are sensitive to ultrasonic imaging, so that when they reach the area of the body where the drugs are needed, an ultrasonic pulse will release the drug compound inside.

The technology is currently geared for treating cancer, specifically head and neck cancers, using less of the chemotoxins than are used in current chemotherapy and radiation therapies. Developing a nanocarrier that can provide more accurate drug delivery with less chemotoxins has not been easy.

“The challenges are one of size, first, and the second challenge is embedding all the compounds, and then the third challenge is making the shell sensitive enough to ultrasound,” Watkin said. “If it’s big, say two microns, it’s really kind of chewed up by the liver, the kidney, the spleen. So what you’re trying to do is make these particles smaller – roughly about a tenth of a micron or a hundred nanometers – so they tend to slip through the filtering system of the body a few times. The third thing we do is we actually put monoclonal antibodies on these so they go where they want to go. So we’re really dealing with targeted, image-guided interventions.”

Watkin’s long list of projects also includes a recent and unexpected collaboration with neutron physicists at Oak Ridge National Laboratory in Tennessee that has led to an innovative biological imaging method. His paper about the nanoparticles that appeared in Academic Radiology caught the eyes of the Oak Ridge physicists and he was invited to go there and give a talk about the technology.

It turns out that the gadolinium oxide nanoparticulates that Watkin’s lab invented and was using to create nanocarriers were also excellent for use with neutron imaging, a method that has been used on metals but almost never for biological imaging.

“Gadolinium oxide has a really great thermal-neutron capture cross-section,” Watkin said. “In other words, if you beam neutrons toward this little nanoparticle it absorbs them and then releases radiation. This was one of those ‘gee wouldn’t it be great if we could use this’ things.”

So Watkin began a project with Oak Ridge and the National Institute for Standards and Technology (NIST) using NIST’s neutron source facility and in less than a week demonstrated advanced, high-resolution, tomographic neutron-based imaging of biological tissue.

“We’ve been able to demonstrate and compare neutron-based imaging of lung tissue compared to magnetic resonance and microscopic imaging and the (neutron) images are fairly spectacular,” Watkin said.

Whether it is the development of a new biological imaging technique, improving current imaging methods or using them for drug delivery, or fashioning a health monitoring devices, Watkin hopes all of his applications actually go to helping people in some way. He said he sometimes gets inspiration from the Institute’s namesake, Arnold Beckman, who was known for developing technology like the DU Spectrophotometer.

“Coming from a meeting the other day I walked past Arnold’s statue and I think about the technology he developed and what it’s contributed,” Watkin said. “I think that’s inspired all of us.”