A paper by four faculty members and three graduate students from the Beckman Institute at the University of Illinois published by the Proceedings of the National Academy of Sciences reports on research that used an innovative, fast optical imaging technique for studying neuronal activity associated with language processing in ways that weren't possible before. 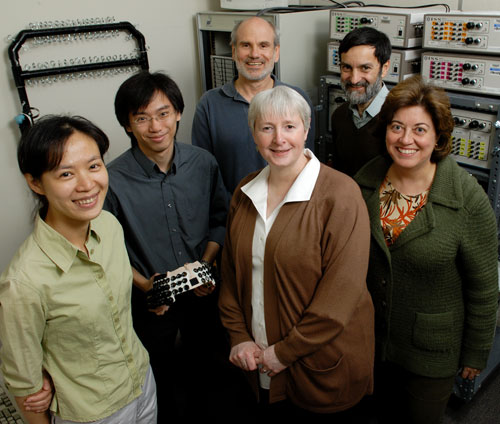 The researchers and students, all members of the Biological Intelligence research initiative, co-authored the paper, titled Imaging Cortical Dynamics of Language Processing with the Event-related Optical Signal, for the current issue of the Proceedings of the National Academy of Sciences journal and posted online this week. Authors are Department of Psychology faculty members Susan M. Garnsey, Gary S. Dell, Monica Fabiani, and Gabriele Gratton, as well as graduate students Chun-Yu Tse, Chia-Lin Lee, and Jason Sullivan.

The PNAS paper reports on applying for the first time a functional brain-imaging method developed by Fabiani and Gratton called EROS (event-related optical signal) to the study of neuronal interactions within and between the left temporal and frontal cortex in regions of the brain associated with language processing. Unlike other methods, EROS rapidly provides both spatial and temporal information on how the brain processes language.

"The question here is that the relative interplay between the two areas is not very well understood," said Gratton. "Its not really clear how they interact with each other; its not obvious how information is moving between these two regions. Now we can study a lot of things that werent possible before."

EROS uses near infrared light to identify changes in the light scattering properties of brain tissue related to neuronal activity. Applied to the topic of language processing, the neuroimaging technique gives insights that arent possible with other methods that are commonly used by researchers in the field such as functional Magnetic Resonance Imaging (fMRI), which provides excellent spatial but not temporal information. Techniques which are effective for studying temporal aspects of language processing like scalp electrodes that record event-related brain potentials (ERPs) dont provide detailed spatial information.

In their paper, the researchers write: "Analysis of the neural basis of sentence processing requires separating, in both space and time, the activity observed in each of the relevant regions." EROS allowed them to identify changes in neuronal activity related to language processing while providing "spatial and temporal resolutions on the order of a few millimeters and milliseconds, respectively." That capability means researchers can get a dynamic, as opposed to static, view of interactions in the brain associated with language processing.

"Thanks to EROS we are studying the dynamics," Fabiani said. "People have absolutely no trouble understanding language at fast speeds but static methods like fMRI give you one picture for everything that happens and really dont capture the dynamics of language."

Due to the speeds involved in language processing, the faster capabilities that EROS provides are important for researchers like Garnsey whose focus is on language comprehension.

"The really crucial thing this technique adds is the ability to look at the relative timing of different aspects of language comprehension," Garnsey said. "Words come in at an average of about four per second; thats true for both reading and listening, so things are changing really fast. At first you think what Im saying means one thing and then the very next word tells you, oh no, it means this other thing instead."

Garnsey borrowed an analogy from a speaker she heard a few years ago discussing fMRI, which looks at blood flow to active regions in the brain as a method for studying cognitive processes.

"The main part of the (fMRI) signal happens many seconds after the event that you are interested in," she said. "This speaker likened that to trying to tell whats happening 30 million light-years away using light that is only now reaching you 30 million years after the event actually happened.

"Whereas what we are doing is something that lets you look right now as it happens. Think of how many more words have come in through the course of six to eight to 10 seconds, how many times your interpretations could have been changed by those new incoming words."

The researchers looked at regions in the left frontal and temporal lobes of the brain that are known to be crucial to language processing, including the superior temporal cortex (STC), middle temporal cortex (MTC), and left inferior frontal cortex (IFC). They focused on the spatial and temporal dynamics of activity in these regions while people processed semantic and syntactic anomalies, and confirmed the importance of these regions in sentence processing. They also gained data on possible activation flow from posterior to frontal regions of the brain and on the possible involvement of distinct areas of the superior and middle temporal cortices in semantic and syntactic processing.

Fabiani said the fact that the EROS results correlate with simultaneously collected ERP results validates the use of EROS for studying language processing.

Garnsey said she recently gave a talk about the study at an annual conference for language researchers in Finland and already has about 15 e-mails requesting copies of the paper.

"We know that the fine timing is incredibly important," Garnsey said. "People are excited about this technique because it lets you look at both the fine timing of events and what parts of the brain are contributing to those different kinds of events."