Joseph Lyding has been using the ultrastable scanning tunneling microscope (STM) he invented for numerous research projects at the Beckman Institute ever since he built ultra-high vacuum chambers to house STMs here in 1992. Now, by using STM technology and a technique called Dry Contact Transfer, Lyding's group is paving a new way toward the much sought after goal of integrating carbon nanotubes with advanced silicon technology. 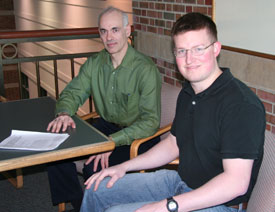 The research line began in 2003 when Lyding and student Peter Albrecht first developed the Dry Contact Transfer (DCT) system for depositing nanotubes onto a surface, eliminating the need for a chemical (wet) deposition method.

The research has demonstrated that single-walled carbon nanotubes (SWCNTs) retain their electronic properties when deposited by a stamping process onto the silicon substrate. The STM tip enables precise atomistic manipulation and the DCT method allows deposition of individual nanotubes on the silicon surface. DCT is an ultra-clean method, a necessary feature for inspecting and testing nanoscale interfaces between the SWCNTs and the silicon substrate.

"It's allows us to understand as well as possible the atomistic level interactions between the tube and the substrate," said Lyding, head of Beckman's Nanoelectronics group. "Without that degree of cleanliness you can't study those interactions. You would be guessing about what the level of functionality was and you probably don't want to commit to a technology without knowing very specific information."

Recently, the research has produced a series of papers illuminating the potential of combining single-walled carbon nanotubes with advanced silicon-based integrated circuit technology.

Albrecht said the article is the first to show that the unique electronic character of both metallic and semiconducting carbon nanotubes is preserved when they are supported by a technologically important Si(100) platform passivated with a single atomic layer of hydrogen.

"Moreover," he added, "depending upon the type of impurities ('dopants') intentionally incorporated into the substrate, we can tune the electronic band alignments between the nanotube and the underlying silicon."

Lyding said carbon nanotubes allow electricity to pass through about 10 times faster than silicon, a key factor in their potential value for microelectronics.

"If you look at where the silicon industry is going and look at what companies like Intel are doing to their transistors, they're basically trying to convert them into a one-dimensional type of structure," Lyding said. "As a result, the processing becomes more complex and the gate used to switch the conducting channel on and off must surround it on multiple sides in order to optimize the electrostatics. A single-walled carbon nanotube is inherently one-dimensional, so it has a natural advantage.

"Also because all the carbon atoms are bonded with each other, there are no dangling bonds like you have at the oxide silicon interface in a MOSFET, so there are no surface states. So it also means you can use any kind of gate insulator, including new high-k dielectrics, which means you are not really tied to a particular substrate. You could make a nanotube transistor and transfer it to something else. You could make it on almost any substrate because the properties go with the nanotube. There are lots of intriguing advantages."

Albrecht said carbon nanotubes can be both metallic and semiconducting, allowing for different electronic responses.

"The key advantage is you could potentially use the metals to serve as the wires in a nanoscale integrated circuit, and you could use the semiconductors to be your devices," Albrecht said. "Also, depending on the diameter of the tube, that determines in large part the electronic properties of the semiconducting tube, including the band gap. So for the same type of bonding in the same type of materials, you can get very different electronic responses. They are very versatile."

Lyding said the next step in their research is aimed at making a fully functioning device, but one that could still be examined at an atomistic level with the ultrahigh vacuum STM.