Beckman Institute faculty member Jonathan Sweedler is doing research at the cellular and nanoscale level that is providing new insights into how the brain works.

Jonathan Sweedler takes a unique approach to investigating the incredibly complex workings of the brain: he often casts his research eye on something simple, like a sea slug.

Sweedler's preferred brain of study belongs to the marine mollusk Aplysia californica. The Aplysia's simple nervous system is comprised of approximately 10,000 neurons, almost 10 million times fewer than what's found in a human brain - yet still capable of long-term memory and a variety of learning tasks. Aplysia offers researchers advantages like large, easily accessible neurons, and the chemicals and molecular scale processes found in the sea slug are the same ones at work in higher-end brains like those in mice and humans.

With a focus on determining how signaling molecules work in the nervous system, Sweedler and his research group study neurochemistry in some of the most primitive brains found in nature, such as jellyfish and sea slugs, to much more complex neural models like those found in mice. By developing and using advanced measurement tools, the Sweedler group has been able to separate brain tissue into individual cells, measure their chemical contents, and describe their chemical and electrical interactions in entirely new ways.

"It allows us to understand that even in the simplest animal this complex interplay of neuropeptides and classical transmitters is what helps to generate the complex response that allows the animal to interact with its environment," Sweedler said. "I think as we look at simpler animals we realize that, yes, there are fewer neurons and they are anatomically much simpler, but from a chemical point of view, their brains use as many chemical signals as our brains. That is one of the things that we have been able to take advantage of in our studies."

"It allows us to understand that even in the simplest animal this complex interplay of neuropeptides and classical transmitters is what helps to generate the complex response that allows the animal to interact with its environment."

Sweedler is a professor of Chemistry and Director of the Biotechnology Center at the University of Illinois, and a member of Beckman's NeuroTech group. His research interests include areas as diverse as neurochemistry, biological sensors, and advanced tool-building using methods like mass spectrometry and nuclear magnetic resonance (NMR).

Sweedler says about half of his work involves creating advanced analytical methodologies such as microseparations, mass spectrometry, and nanoliter sampling using microfluidics. Members of his group and their collaborators then use these technologies to further their research in a broad range of scientific areas - with results that have paid off spectacularly in the past decade. His group's unique ability to perform measurements at the single cell level has led to publication of results that used some of the smallest biological samples ever reported.

Another aspect of Sweedler's research involves characterizing the signaling molecules of nervous systems, the workings of which guide behavior and empower memory. Sweedler's method for investigating neuronal function is to look at the chemicals used by individual neurons to talk to each other. Neuropeptides represent one set of these chemicals; similar neuropeptides are found in almost every nervous system, from Aplysia californica to humans, and all nervous systems studied thus far use signaling molecules such as serotonin or glutamate.

"They use compounds that at times are identical and, at times, have slightly different chemical structures," Sweedler said. "By and large, the molecules used by neurons to communicate with each other are surprisingly conserved across every brain that's been studied. So what we do is study the best model organism to answer a particular question and then we immediately relate it to others." 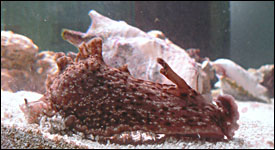 Last year Sweedler's group performed the first-ever subcellular imaging of vitamin E through mass spectrometric imaging of Aplysia brain cells. The research surprisingly showed vitamin E was concentrated in a neuron near a point where it connects with other neurons, suggesting an active role for vitamin E in cellular signaling and transport. This new information could aid medical and academic researchers studying brain function.

Sweedler said that chemical differences between neurons are key to their operation, whether the neurons are in neuronal circuits involved in feeding, reproduction, or other functions. His group has spent the past decade investigating neuropeptides, which are released by neurons and mediate nervous system function by acting as neuromodulators and hormones.

"We're close to doubling the number of known neuropeptides in animal models such as Aplysia, so when people study their feeding or reproductive networks, as they do with physiology, they now have a much better understanding of what's happening with the peptides because of our work," Sweedler said. "Even in the most well-defined model systems we've discovered lots of novel neuropeptides. With these new peptides, we have a better understanding of what's happening and so do other groups."

Sweedler's efforts in this area meant he was a perfect fit for one aspect of a multi-university project that sequenced and annotated the honeybee genome. Using the lab's mass spectrometry techniques and the new honeybee genomic data, Sweedler and his collaborators reported 100 neuropeptide sequences from a honeybee brain and characterized 36 genes that created these chemicals, including 33 previously unknown genes.

While the honeybee brain isn't commonly used for studying neurophysiology, the well-defined social interactions of the honeybee make it an important model for adding to our knowledge of the sociogenomic factors that underlie animal behavior. Sweedler said that researchers like Gene Robinson, a Beckman affiliate and professor of Integrative Biology who helped lead the gene sequencing effort, have shown that changing the expression levels of even a few key genes can change an animal's social behavior. Gaining insight into the role neuropeptides play in the honeybee brain is an important part of the puzzle for understanding social behaviors in the brains of both bees and humans.

"Since we think neuropeptides are really important for controlling behavior, our hypothesis was that some of those genes would be neuropeptide genes," Sweedler said. "Thus, we tried to characterize the neuropeptide genes in the honeybee genome." The work produced a paper recently published in Science (2006, 314, 647).

Sweedler is involved in a number of other research projects, including a collaboration with Biological Intelligence Co-chair William Greenough aimed at developing a mass spectrometry technique for studying changes in the brain that occur during learning in mammals. In another important project, Sweedler and his group are improving their single cell analytical tools with new sampling and sample measurement approaches using microfluidics and new methods of microfabrication.

"One of the reasons we've been very successful in collaborating with people is we know a lot of the neuroscience and biology ourselves so we're actually able to cast our instruments and our questions in such a way that they are more likely to work," Sweedler said. "We're able to answer a lot of questions a lot faster than other groups. It's also useful for students leaving the group because they have this unique training in physical measurement and neuroscience; it means that they stand out."

While Sweedler is interested in answering basic science questions, the tool development and future application of the research are also geared toward achieving real-world results. He hopes the neurochemistry work will result in discovery of new neurochemical pathways that would eventually be useful as pharmaceutical targets or for other applications.

"It is satisfying to discover a new neurochemical pathway, its function, and find it conserved across multiple models and eventually understand what it does in mammals and humans," Sweedler said. "That is one of our goals. That's one of the advantages of this kind of crossing (boundaries). It's trying to relate basic neurochemistry to overall organism function."