Grad students to present research May 4

The hybrid event will take place at noon on Wednesday, May 4 in 1005 Beckman Institute and on Zoom.

Register here to attend in person or on Zoom. In-person attendees must register by Monday, May 2 to receive a boxed lunch. 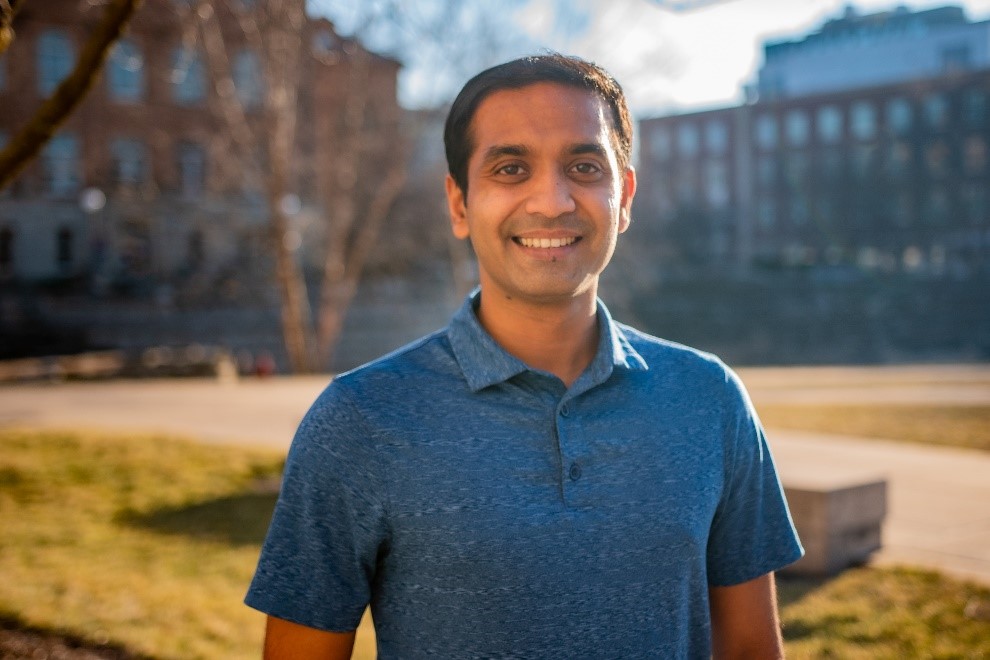 Bashar Emon is a Ph.D. candidate studying theoretical and applied mechanics and advised by Taher Saif, a professor of mechanical science and engineering. He earned his B.Sc. in civil engineering in 2012, and his M.Sc. in structural engineering in 2014 from Bangladesh University of Engineering and Technology. Currently, his research is focused on the role of cellular force in metastatic progression in colorectal cancer. He also seeks to explore the dynamic crosstalk between cancer and stromal cells within the tumor microenvironment. In addition to his Beckman Institute Graduate Fellowship, Bashar was awarded the NIH T32 Traineeship through the Cancer Center at Illinois TiME program in 2018; the MAVIS Future Faculty Fellowship in 2020; and the CCIL Graduate Scholarship in 2021.

Abstract: Cell-generated force plays an important role in cancer progression by regulating inter- and intra-cellular signaling, as well as cell-matrix interactions. To explore the precise mechanism by which cellular force promotes metastatic development in 3D tumor microenvironment, we have developed a novel 3D tumor model self-assembled on a biomechanical sensor that directly quantifies cell traction force and matrix remodeling as a function of time. The sensor also allows simultaneous brightfield and/or fluorescence imaging which enables correlation of biophysical and biochemical processes within the tissue. With primary fibroblasts and cancer cells, we demonstrated the efficiency of the sensor by measuring single/multiple cell force (with 1 nN resolution) and change in tissue stiffness due to matrix remodeling by the cells. Multi-cellular systems, such as cancer cell and stromal fibroblasts coculture tissue (FET/CAFs) that mimics tumor microenvironment, increased tissue stiffness three-fold within 24 hours in a force-dependent manner. At single cell scale, contractility and force-generation rate in 3D matrices is lower than on 2D substrates of same stiffness (~0.5 kPa). We also found that YAP1 transcriptional co-activator can localize in the nuclei of CAFs with lower cell-forces in 3D collagen. Our results indicate that pro-metastatic YAP1 activation in 3D is dependent on nuclear deformation resulting from cell-traction dynamics, rather than stiffness of the matrix. Overall, the novel sensor/model serves as an ideal platform for multiplexed bio-physicochemical assays in vitro. 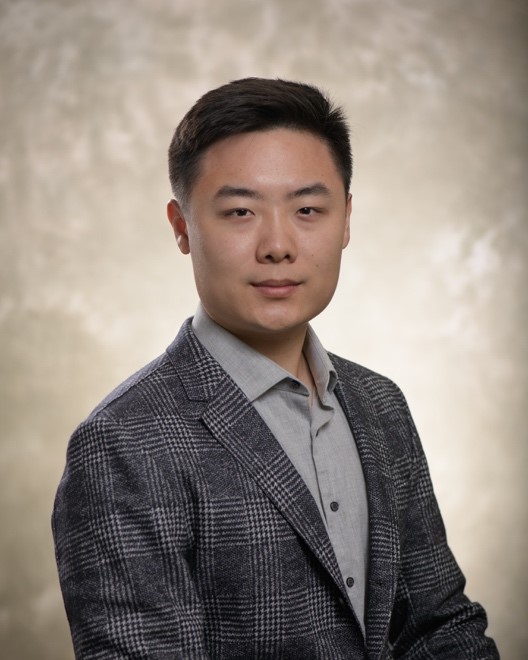 Yuxuan Richard Xie is a Ph.D. candidate in bioengineering with a computational science and engineering concentration. He works in interdisciplinary teams under the guidance of Jonathan Sweedler and Fan Lam. His research interests involve data-driven methods for high-dimensional chemical characterization of complex biological systems and computational biology. He received his bachelor’s degree in biomedical engineering from the University of California, San Diego. He is a 2021 Beckman Institute Graduate Fellow.

Abstract: Comprehensive chemical profiling of complex biological systems, such as the brain, using mass spectrometry aids in understanding the molecular basis of brain functions. Laser-assisted MS (e.g. MALDI-MS) provide key capabilities for imaging the spatiochemical architecture of tissue environments, as well as high-throughput molecular characterization of single cells. The challenges for system-level profiling with high-resolution MS are the limited throughput, and lack of methods for multiscale analysis and data interpretation. In this work, computational approach is leveraged to enhance the acquisition speed of the large-scale imaging experiments with up to 10-fold higher throughput. Most recently, we have proposed an enabling deep learning-based computational MS approach to rapidly reconstruct rich chemical information in three-dimensional tissue volume and single cells of the rat brain, combined with a multimodal data analysis workflow for joint interpretation of the brain chemical profiles at multiple organizational scales. 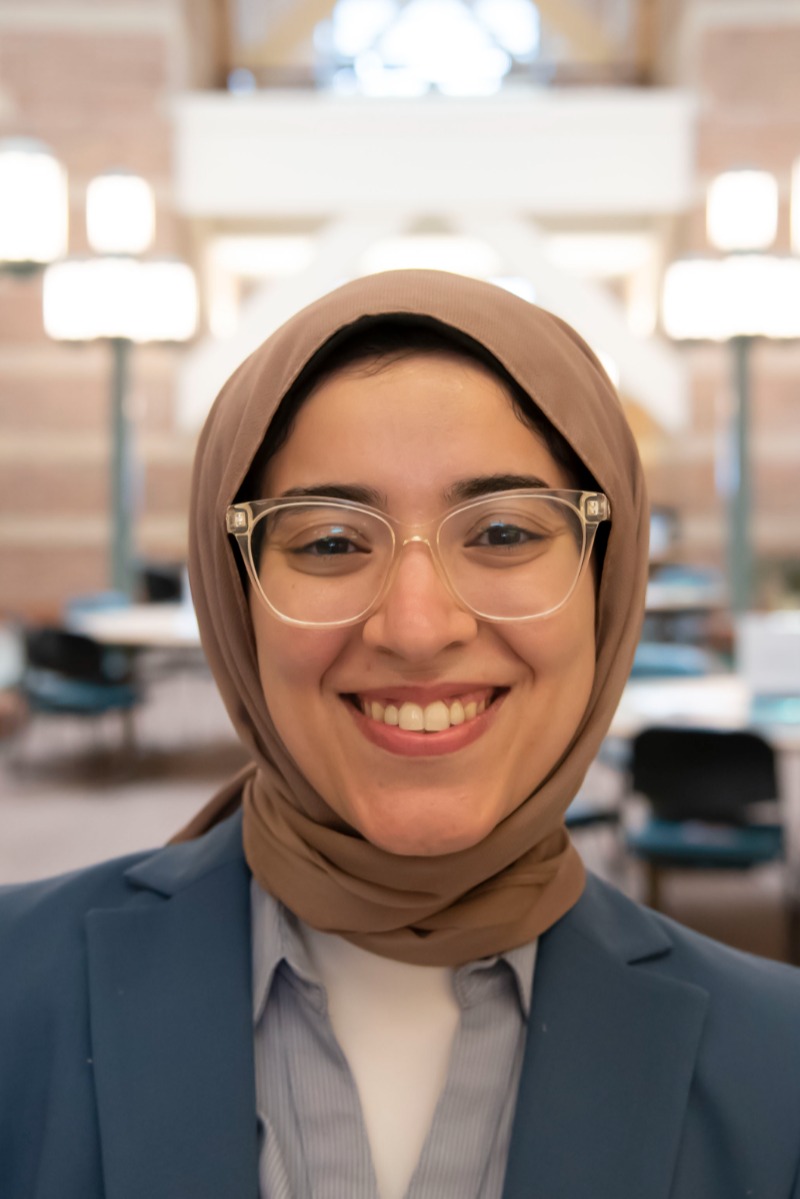 Eman Hamed Eman Hamed is a graduate student researcher in Beckman’s Neurotechnology for Memory and Cognition Group. Her research focuses on enhancing glymphatic flow in the brain, a natural process that helps the sleeping brain flush out toxins and clear waste, to ultimately improve brain function in patients suffering from neurodegenerative conditions like Alzheimer's disease. In August of 2022, Hamed anticipates completing a Ph.D. in neuroscience from UIUC and an M.Sc. in advanced neuroimaging from the University College in London. She served as a Fellow of the European Board of Neurological Surgery from 2017-2020 and completed an internship in the University of Alexandria's neurosurgery department in 2018. She was also a 2020 Beckman Institute Graduate Fellow, a 2021 Nadine Barrie Smith Memorial Fellow, and the 2022 Beckman-Brown Interdisciplinary Postdoctoral Fellow.